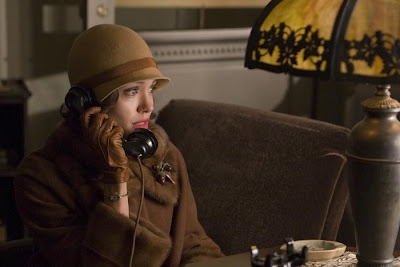 Although it didn't receive the plaudits showered on Gran Torino just a few weeks later, Changeling is a still a very confident bit of filmmaking by Clint Eastwood, a smoothly narrated slice of 1920s Los Angeles in which police abuse runs rife (some might argue little has changed except the nature of the abuse). I'm rarely a fan of Angelina Jolie's work, but she's generally strong here despite the fact that she doesn't look as though she belongs in the period. Eastwood is canny in using Jolie's status as a sort of tabloid ur-mother to underline the plot, drawn from real events, which concerns the disappearance of a young boy and the substitution, by the police, of an entirely different boy some months later under the guise of a successful resolution to the case. The film is especially assured when it reveals the sinister story that's likely the missing boy's true fate - the performances in the scenes between a cop and a troubled young boy are mesmerizing - and Eastwood adeptly captures the political feel of the era, with radio addresses a key component of public discourse.

This film unexpectedly blew me away. I thought Jolie was pretty incredible (and I kind of went into it not wanting to like her), and the story completely invested me. Really compelling, and I'd say one of my favorite Clint Eastwood films.