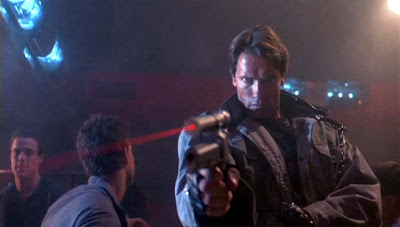 Like Kathryn Bigelow's Point Break a few years later, what's critical in the action sequences is Cameron's sense of placement, and our consequent awareness of the physical peril in which his characters find themselves as their cars and bodies whip across the screen. The script, too, is smart, and indeed smarter than in several of Cameron's subsequent, longer films: it's taciturn for the most part, particularly when it comes to Arnold Schwarzenegger's eponymous character, but witty in dealing with the problems that confront Kyle Reese (Michael Biehn) when he must not only present Sarah Connor (Linda Hamilton) with an outlandish tale but must also ensure she believes him to be entirely serious and sane.