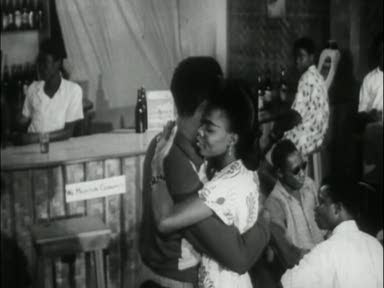 The Boy Kumasenu was the first feature-length project produced by the Gold Coast Film Unit, led by Sean Graham. In comparison with other colonial film units -- the Bantu Educational Kinematograph Experiment (BEKE) or the Central African Film Unit (CAFU), for instance -- Graham's outfit was pretty broad-minded, rejecting the idea that Africans needed a special film language, that is, a film language that the colonial masters thought would be simple enough for "primitive Africans" to understand. Where other film units, over time, adopted an extremely static, slow style, Graham's film is full of traveling shots, quick cuts, atmospheric night-time scenes, and the occasional interesting angle; it's much more technically sophisticated and, by the standards of these things, entertaining than other colonial films. There's also a clever finale shot with two kinds of boats used to make a metaphorical point about change.

All that said, Graham's liberalism -- he strongly advocated locally interesting stories and local involvement in front of and behind the camera, complaining about the contributions of visitors like Montgomery Tully and Louis MacNeice -- had its limits: while there is synchronized sound in much of the film, the overriding voice is that of the British narrator (Russell Napier, though the actor was Australian-born). The narrator not only speaks about the African characters we see but in several scenes he actually speaks for them, as though he's saying their lines.

Note: This is part of the Watching Movies in Africa project. The Boy Kumasenu was released in the Gold Coast in July 1952 and there was considerable interest in the film, at least in the local press, which highlighted numerous screenings and printed several reaction pieces. The film is available online at Colonial Film: Moving Images of the British Empire; that site is an extremely valuable source for films about the Empire.