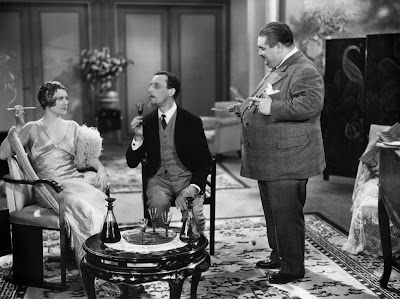 The first of a great many versions of Marcel Pagnol's 1928 play, which also appeared in an American incarnation the very same year, Louis Gasnier's film also marks actor Louis Jouvet's first screen appearance. Jouvet was already a major theatre star who had been in the running for the original stage production of Topaze, and not surprisingly, given both the origins of the material and the star, the film has a certain theatrical feel. That's especially true of Jouvet's character, who accumulates numerous tics, whether it's the pigeon-toed walk or the constant business with his hands. I couldn't help thinking of David Bordwell's recent piece on the use of hand gestures by actors, but as impressive as some of the detailed work is here Jouvet's constant hand movement eventually becomes rather distracting; it probably didn't help that the sound of the film was so poor that I had a hard time making out some of the lines.

Gasnier had a rather fascinating film career, starting off in 1905 with Max Linder's first cinematic appearance -- he directed dozens of early Linder shorts -- before heading off to the US, eventually ending up directing oddball exploitation features in the mid-1930s, the most notorious of which was the ostensible cautionary tale of marijuana use Reefer Madness. There are occasionally interesting flourishes here, even if Gasnier mostly lets the lines and his lead actor draw the attention -- there's a very amusing transition involving a literal horses's ass, and a curious shot in which Jouvet's face shares the screen with Vermeer's Girl with a Pearl Earring, though it's not clear if the director is suggesting any parallel between M. Topaze and the Dutch girl.