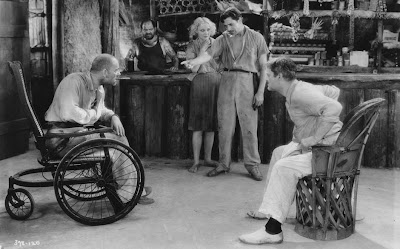 Remade a few years later, with sound, as Kongo, it's hard not to draw comparisons between Tod Browning's version and the later film, so closely do they hew to the same template. There are a few substantial differences -- the remake cuts out the extended stage-magic prologue that no doubt fascinated Browning, always a fan of unusual theatre folk, and also adds in a significant character -- but for the most part the narrative is almost jarringly similar, entire scenes playing out with near-identical results. The sound version is, if anything, rather more thoroughgoing in its seediness, layering further outrages on the manifold moral excesses already onscreen in 1928.

Ultimately, though, the films come down to something of a comparison between the differing acting styles of Lon Chaney, in one of his final screen appearances, and Walter Huston. There's no doubting the physical commitment of either actor, although Chaney is particularly arresting as he drops, animal-like, down the rope that leads to his sleeping area. He allows his withered legs to drop before him, before slinging the useless limbs one by one into a wheelchair: it's a fascinating bit of physical acting, which Browning repeats a number of times with variations. Chaney achieves an entirely different, subtler effect in the key scene where he realizes just how mis-guided his vengeance has been; the transition on his face from feral outrage to heartbroken sorrow is extraordinarily multi-layered, and no speeches from Huston in the later version can hold a candle to the intensity of the moment.

Note: This is part of the Watching Movies in Africa project. The film was shown in some locations in East Africa in the late 1920s/early 1930s, although white audiences objected to the film on the grounds that it suggested that whites were less than moral paragons, and also implied that white civilized values could not overcome African superstitions.