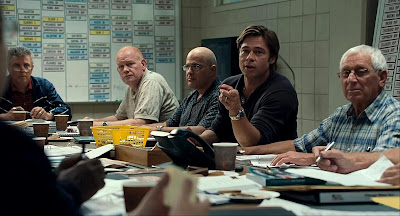 So many mainstream American movies more or less ignore the actual mechanics of working -- much of the time, even the allegedly gainfully employed seem to have unlimited free time and resources -- that it's quite surprising to come across a film that is essentially about watching a man work for two hours, whether it's dealing with superiors, making personnel decisions, or dealing with lingering frustrations long after the working day should be over. More surprising still is that Bennett Miller finds a way to create compelling tension from this material -- while the ostensible narrative centers on the actual 2002 season for the Oakland Athletics as recounted in Michael Lewis's original book, what's really on the line throughout the film is Billy Beane's job.

Miller shoehorns plenty of material from the original book -- from relatively abstract concepts about player value to specific players who were the subject of draft and trade decisions in 2002 -- without overloading the film with dry onscreen detail, mostly because he relies on the easygoing charm of his lead actor to hold the attention, and to act as an audience surrogate when Beane's assistant (Jonah Hill, who's excellent) delves beneath the statistical surface (just) a little. Beane, as played by Brad Pitt, is bright and eager to master new concepts, but also, crucially, has just enough of a background as a player to speak to the playing staff with some authority (it reminded me of my own workplace: I work with faculty and the simple fact of "not being faculty" can diminish one's authority in the eyes of some professors). There's something slightly broken in Beane, which the film suggests is deep in his own background: he can no longer enjoy the games themselves. Unlike the fans, whose belief often defies the rational, Beane is aware that even the hottest streak is doomed to end in a game built on failure, so it's always about working to do the best with what he has on hand. It's a melancholy idea, but hardly a new one in baseball, which always seems to have a sense of the elegiac in its seasonal structure.