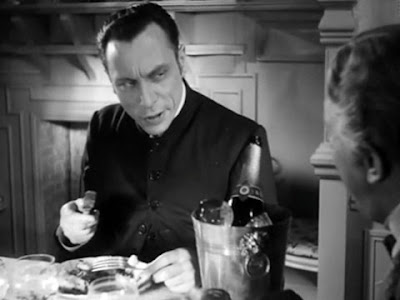 Louis Jouvet had several memorable actorly face-offs over the course of his screen career, and while his character here is deeply unsympathetic he has one treasurable scene over the dinner table with Michel Simon, in which he probes relentlessly to satisfy his curiosity as to the unexpected absence of Simon's spouse (Françoise Rosay). Simon's increasingly convoluted explanations set the plot's farcical ramifications on their way, and Jouvet, for his part, is gifted with the line "Bizarre, bizarre," rolling the word around in his mouth as he ruminates on the information supplied to him.

It doesn't sound as though Jouvet enjoyed himself to any great degree on the production, objecting in particular to the ridiculous, if comically effective, costume he has to wear near the conclusion, though the experience can't have soured him entirely on Marcel Carné, making his second feature here, since he appeared in the director's subsequent film, Hôtel du Nord, the following year. Still, he and Simon apparently both set out with the intention, not necessarily declared out loud, to drink the other man under the table during said dinner scene. It takes quite a man to even contemplate engaging with an opponent of Simon's legendary appetites: perhaps he looked like an easy mark since he played characters far beyond his years for much of his career; sadly, I've no idea who won this particular battle, though the actors renewed their combat in La Fin du jour a couple of years later.

As for the film itself, Drôle de drame is chiefly concerned with appearances and disguises, especially the gulf between the public face and the private man; Jouvet plays the hypocrite-in-chief, and while he's by no means the only person hiding something, in the film his moral failings far outweigh the bloody crimes of Jean-Louis Barrault, perhaps cinema's least likely serial killer, bouncing around the screen between offing the occasional butcher when he's not flinging himself at an eyelid-batting Françoise Rosay. The disguises adopted by one and all are intentionally absurd, in line with the farcical turn -- Simon applies a bit of fake beard, and renders himself completely unfamiliar to every single person in the film such that he can wander around his own home while suspected of being on the run for murder. Realism, though, is hardly the goal here.