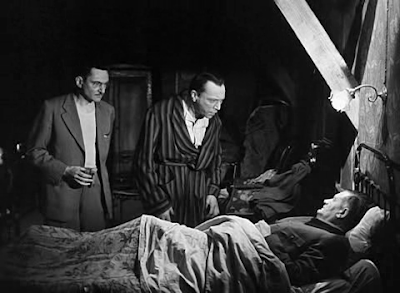 Though all of the episodes in this omnibus film came from the pen of Charles Spaak, the tone varies a good deal in the hands of four different directors (Jean Dréville directed the final two segments). The stories all deal with the return of imprisoned French men and women after the war, and while the initial narration suggests that we're about to see only the negative experiences that accompanied repatriation, that's not entirely true -- one of the segments is very light in tone, and two others end very much on an upbeat note. 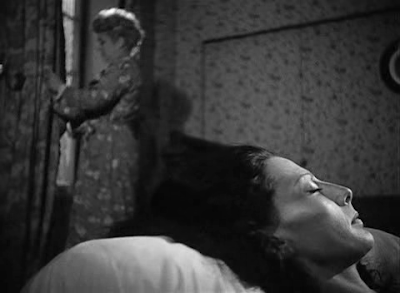 The film was not a box office success, and while the list of hit portmanteau films is not exactly lengthy to start with, one suspects that this film a little too close to recent experience for many viewers. Even in some of the lighter sequences, Spaak inserts numerous small, even throwaway, observations about the nature of life in France just after the war. There are the fake ration coupons, the people keen to burnish their image as members of the resistance (it's of note when a character does not immediately mention his service, as though such self-effacement was uncommon, and perhaps a sign of more genuine participation), the almost absurd efforts of petty officialdom to recuperate the released prisoners for the nation's self-image, and the constant reflection on who did or did not collaborate and to what degree, with Spaak casting aspersions on the near-ubiquitous comités d'épuration of the immediate post-war period.

Clouzot's segment, the third, is by some way the film's strongest sequence, pushing both characters and audience to reflect on the nature, and perhaps the banality, of evil, and posing the question of how one might behave in extreme circumstances. Set in a hotel that accommodates those not yet able to return to their actual homes, the film, featuring Louis Jouvet, gives a vivid sense of the way in which many returnees felt caught between worlds, no longer in their original homes and yet desperate to start new lives if not quite to resume old ones. Spaak treats that theme with a good deal more humour in the fourth segment, in which a returnee finds his apartment has been requisitioned for the benefit of a puffed-up minor resistant. The only sequence that rivals Clouzot's in intensity is the first, a true chamber piece centered on a woman forced to deal with the property shenanigans her relatives have indulged in during her enforced absence. It's a brutally cynical segment, excoriating the idea of the noble France left behind.

In the end, the primary unifying thread is that of performance -- each segment has a very strong lead actor. Bernard Blier anchors the opener, with barely anything to act against in the film's most powerful scene since he's talking to a mute, virtually immobile invalid; it's among the strongest work I've seen from the actor. Louis Jouvet is predictably magnetic, and multi-layered, as the embittered interrogator forced to confront his own contradictions in Clouzot's lacerating section, and Serge Reggiani, playing a rather more pleasant character than is often the case, is also fine in the final segment even if the piece itself is far too neat. François Périer and the popular (and to me unfamiliar) actor Noël Noël feature in the lighter segments, and they convey rather well the way in which entirely ordinary, good-humoured men are confronted by the strangest of circumstances both during their imprisonment and on their return home.