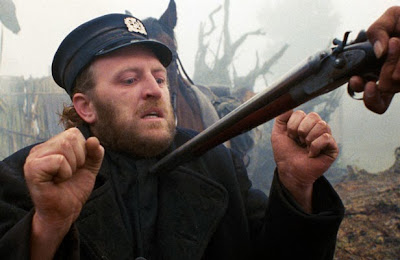 It's also highly assured from a technical standpoint, in contrast to the patched together qualities of Murphy's Wild Man, and Murphy finds some stirring beauty in the New Zealand landscape years before Peter Jackson altered the field; the sequences of horsemen crossing the sun-dappled land recall Breaker Morant, another film that did its utmost to rework our understanding of the British colonial record. And all this without sacrificing thrills and spills, whether it's the set piece attack on a settler home or the iconic Kiwi cinema moment when Bruno Lawrence raises his quadruple-barrelled shotgun for the first time.