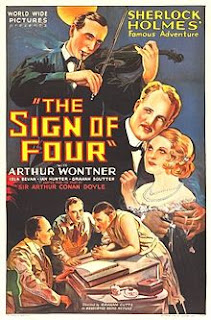 The transition from Benedict Cumberbatch as Sherlock for the 2010s to Arthur Wontner's 1930s edition is a little disconcerting -- and certainly not kind to Wontner, who comes across as older than his already middle-aged years, and entirely unlikely as a purveyor of fisticuffs (perhaps that's why Graham Cutts speeds up the action sequences, since otherwise Wontner might have looked rather lethargic while swinging his fists). Wontner appeared in five Holmes vehicles between 1931 and 1937, one of which is entirely lost; while Wontner isn't my cup of tea as Holmes, it's amazing to me that the remaining films all available only in dreadful public-domain copies, and that no-one has attempted to market cleaned-up versions to the presumably large Holmes fanbase. For the most part, this is pretty routine stuff, with a very pallid Watson in the form of Ian Hunter, though Cutts makes nice use of sound to enhance the suspense, and there are a few agreeably lurid supporting roles -- Graham Soutten, as the villainous Jonathan Small, looks as though he might have seen Lon Chaney's performance in West of Zanzibar, though Soutten's onscreen disability -- a missing leg -- was entirely genuine.