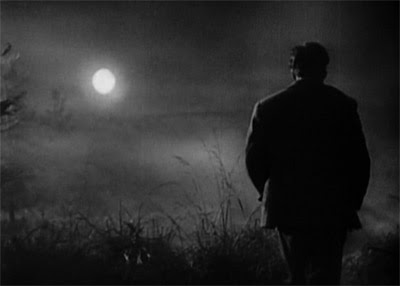 I'm always a little lost for words when dealing with the true masterpieces, mostly because it often seems as though everything's already been said -- even when writing mostly for myself, I have the strange sense that my thoughts are more than likely just repetitions or reworkings of things I've read along the way.

Murnau's film carries the sub-title "A Song of Two Humans," and that's as good a description of the film's effect as anything else -- despite the difference of medium, there's a direct, intense lyricism that reminds me of the best popular music, which functions as a kind of emotional essence in three of four minutes. Though the running time is rather longer here, as with the subsequent City Girl, Sunrise has the simplicity of mythology: a man yields to the temptation of another woman, a visitor from the city, before rediscovering his love for his wife. It might be a country song -- and there's no dismissive sarcasm in the comparison.

The point, of course, is what Murnau does with this bare skeleton: while preserving that straightforward narrative, the director finds complexity in the emotional shadings of the central couple as they stumble toward some form of reconciliation, a reconciliation embarked on in the most unpromising of circumstances. The director's effect is achieved particularly through the mastery of shifts in tone, from the leading man's darkest hours -- as he struggles with murderous thoughts -- through to the extraordinary explosion of joy both at the moment he realizes the depths of his love for his wife, and in the film's final granting of a kind of redemption just when things seem once again to be lost. There's a intentional universality to the setting, too: filmed in the US, the scenery transitions from what looks like a gloomy European village through bucolic landscapes to the razzmatazz of the vibrant 1920s city, as if to underline that this particular story could play out against any backdrop; the tram that marks the passage from country to city is almost like the tornado of The Wizard of Oz, whirling its passengers to a new and different world.