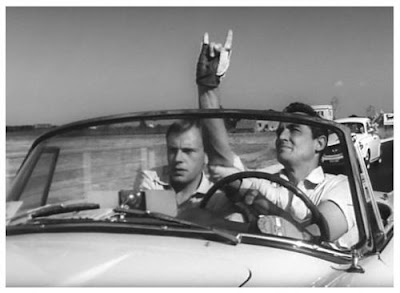 Through the luck of the draw, I've come across a handful of films with stings in the tail of late, but nothing tops the finale here -- an utterly jarring conclusion to a generally breezy film, filled with throwaway Italian pop music of the era. The film opens on a note that recalls Nanni Moretti's wonderful 1994 Caro diario, in which Moretti drives the empty Roman streets during the height of the summer, before the film develops into a picaresque account of the open road, replete with enjoyable minor characters and a constant onward momentum -- the next town, the next adventure, the next corner -- that's fundamental to the character played by Vittorio Gassman. He's a man whose apparently joyful view of life gradually reveals itself to be a cover for his fundamental inability to follow through on anything serious or worthwhile; there's fear rather than delight at the heart of the character. That said, the film's way of resolving this problem is, to say the least, a slap in the face; if the analogy is to Italy of the post-war era, the film takes a dim view indeed of the state of the country circa 1962. Gassman is terrific -- finding the tenderness in a character who might otherwise just have been boorish, while Jean-Louis Trintignant is an enjoyable foil, gradually, if very tentatively, loosening his self-imposed restrictions in the company of a man incapable of taking no for an answer.