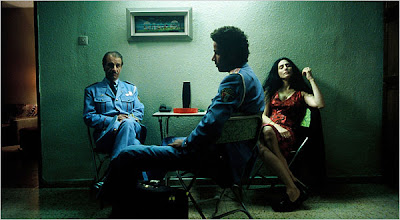 There's a gentle plea for tolerance at the heart of Eran Kolirin's film, which narrates the accidental visit of an Egyptian police orchestra to an isolated Israeli settlement, which might have come across as naive and sentimental were it not for Kolirin's dry humour and his ability to find genuine cross-cultural common ground. Just as the Egyptian cops realize that they will escape with their lives despite their wrong turn, Kolirin subtly but insistently portrays his Arab characters as citizens of the world who, like most of the rest of us, look for nothing more complicated than the pleasures of a night out with friends. 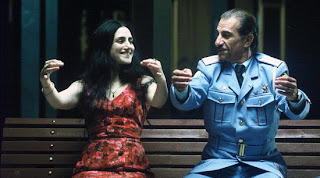 The cross-cultural theme is exemplified in Kolirin's filmmaking style, which evokes early Jim Jarmusch - a scene where three characters sit debating the merits of Chet Baker in an apartment kitchen might have been lifted from Stranger Than Paradise - or Aki Kaurismäki, with whom Kolirin shares an ability to conjure brilliantly funny set-ups out of a well-placed camera and a healthy sense of the absurd. He's also blessed with a phenomenal set of actors; Ronit Elkabetz deploys the full measure of her charm, but the other performances are equally beguiling. 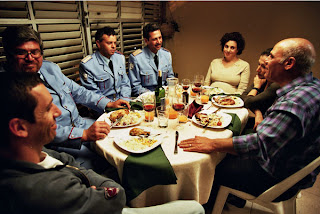 The film is also refreshing for the way in which it adds an alternative image of Israel to our collective consciousness, underlining the fact that the boondocks are the boondocks wherever you are: a sequence shot in a desultory roller disco could have been lifted from a French or American film, as the few dancers roll their way around the room hoping for a connection. That this connection comes by way of a visiting Egyptian policeman, in a hilariously funny reworking of the Cyrano mythology, is the icing on the cake.