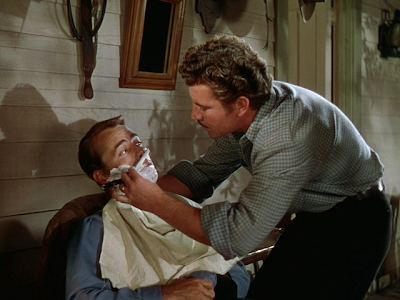 There's nothing all that surprising in Leslie Fenton's Whispering Smith, but it's a well-made entertainment, the kind of effective, carefully made B-plus film that has essentially disappeared from movie screens (popping up, if anywhere, in the guise of episodic television). As far as the plotting goes, it's straight from Hollywood's old standby pile, but the film has a very decent budget that allows for some beautiful opening scenery and a number of well-staged train wrecks. 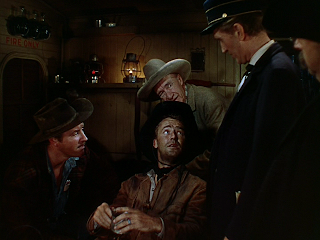 Alan Ladd is solid, if unspectacular, as the eponymous Smith, a railroad detective who has to deal with shenanigans that swirl around old pal Murray Sinclair (Robert Preston). Preston manages to upstage the ostensible leading man on several occasions, particularly in his early scenes with Ladd, who is recovering from an injury; there's an affection between the characters that's effectively rendered by the ease with which the two performers interact. 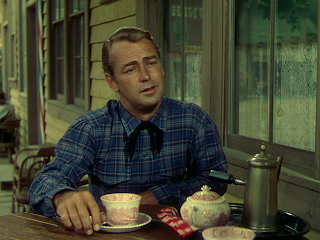 Fenton has a bit of a directorial tic, dollying into his actors to underline a plot development in a kind of visual exclamation point, but other than that he doesn't intrude overly on the performances, perhaps unsurprisingly given he started out as actor. He extracts especially enjoyable turns from William Demarest (whose rat-tat-tat delivery nonetheless seems mildly out of place in a Western setting), Frank Faylen as a strikingly nasty sidekick, and Donald Crisp playing against his more familiar fatherly type as the chief villain of the piece. 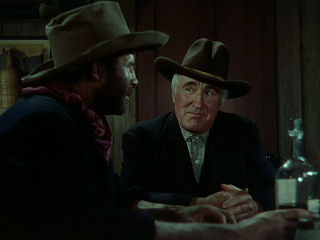 (Part of the Watching Movies in Africa project; Whispering Smith played at the King's and Pen-Agege theatres in Lagos in September 1956).

I don't think that Preston was better than Ladd in their scenes together, just more outgoing. They really work well together on the screen.