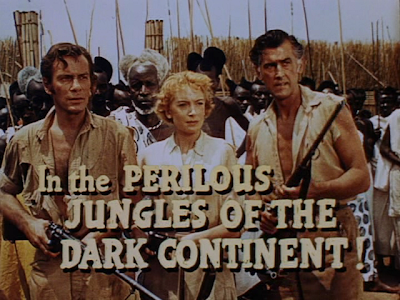 1950, US, directed by Compton Bennett and Andrew Marton


King Solomon's Mines is one of those films that's very difficult to watch without being permanently distracted by the fact that the film belongs to another world. Or rather two other worlds, the late Victorian period when H. Rider Haggard wrote the original book and the period just before African independence when the film was made. 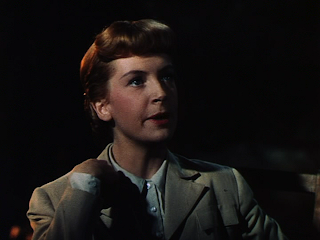 The trailer is itself worthy of note. It's a tremendously lurid bit of work, with a voiceover that demands to be heard to be believed: "Into the strange and wild interior of darkest Africa, Metro-Goldwyn-Mayer sent a motion picture company on safari. Here in its original setting, where no white woman had ever been before, was filmed the story of primitive savagery, of incredible danger." The white woman in question is Deborah Kerr, although there are probably a few long-dead missionary women, and many a colonial official's wife, who would contest her claim to have been the first white woman into the Congo. 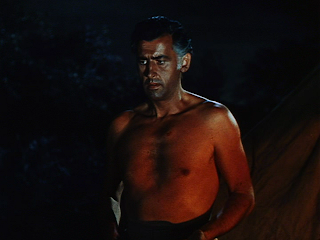 The film itself is, inevitably, far less outlandish than its trailer. By the standards of the genre, Stewart Granger's Allan Quatermain is a pretty understanding great-white-hunter type. He's able to communicate effectively with his staff in their own language, although the film overstates the prevalence of Swahili across eastern and southern Africa. Quatermain is genuinely upset when an assistant is killed early in the film, and he has a well-developed sense of propriety in his dealings with various African tribes. Indeed, in the end, it's hard to decide whether the film is actually more patronising toward the African characters, whose customs are represented with at least some gestures towards anthropological accuracy, or towards Deborah Kerr's Elizabeth Curtis, whose primary mistake is to have been born a woman. 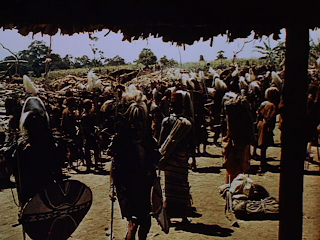 Leaving such weightier concerns aside, the film is an effective if lightweight safari adventure, with some striking scenery and animal footage. Structurally, though, it's rather weak: the middle section is an over-extended series of geographical or cultural challenges, and the film comes to an abrupt end almost without warning, as if the filmmakers realized they'd run out of time and had to scramble to tie up at least some of their loose ends. 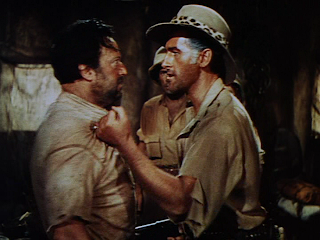 (Part of the Watching Movies in Africa project. This film was widely shown in Zambia and Zimbabwe from the 1950s onwards, and younger audiences remain familiar with it. One of the more unusual aspects of the film from the perspective of my project is the fact that it was actually filmed in Africa, in what are now Kenya, Tanzania, Uganda, and the Democratic Republic of Congo. In the 1950s, it was a rarity for Africans to be able to see themselves onscreen in any context, and it's likely that audiences valued the film on that basis even if the images of Africa were imperfect, at least viewed from the vantage point of the West in 2009.)

My mate Lawrie worked on this. According to him, the morning after Granger's arrival on location, he went missing. Then they found he'd simply got on a plane and left, having heard lions roaring from his tent in the night. No great white hunter, he.

The shoot must have been pretty extraordinary, especially when they worked in areas that were really very little traveled by overseas visitors in the 1940s/1950s. At the time, there were wild, and some not so wild, stories about ritual murders by people assuming animal form (there were trials in what was then Tanganyika in the late 1940s), and I'm certain campfire tales abounded. It sounds as though they had the intended effect on Granger!

"n the 1950s, it was a rarity for Africans to be able to see themselves onscreen in any context, and it's likely that audiences valued the film on that basis even if the images of Africa were imperfect, at least viewed from the vantage point of the West in 2009.) "

This is amazing. I had no idea the film was ever shown in Africa. I think if you had to pick one movie from Hollywood's golden age about Africa, this might be the least offensive. Not exactly a ringing endorsement, but there are few movies of this genre that aren't totally cringe-worthy.