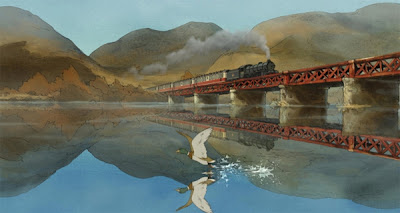 Every now and then I watch a good movie at a bad time, and it's hard to be fully objective about the film's virtues afterwards. This was a fine example: Saturday night, baby in bed at a reasonable hour, glass of wine to hand, curled up on the couch with a reasonably short film from a director whose previous outing, The Triplets of Belleville, we'd both enjoyed. In the context, though, I was completely unprepared for the film's languid rhythm and insistently melancholic air, very different to Chomet's eye-popping previous work. 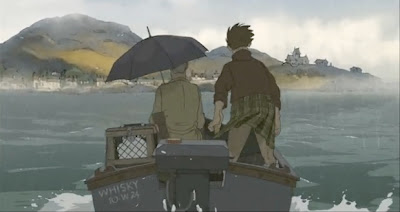 Of course, his inventiveness is on display here as before, with exceptional identical to details such as the blinking of a neon light outside a window or the constant, amusing passage of cars through the streets of Edinburgh. Chomet's ability to convey nuances of emotion with few or no words is also deeply impressive, perhaps never more so in the finale, making use of objects to reflect back on the film's characters. There are dozens of individual shots to treasure, too, whether it's the sweeping overhead shot of Edinburgh, the striking mirror image of a train crossing a bridge, or the references to other films and books - the in-joke featuring a brief sequence of the animated Jacques Tati watching his real self onscreen, or the wink at the cover of Hergé's The Black Island. Indeed, Hergé's style seems ever-present here, in the attention to details of setting but also on occasion in the subtleties of the character drawings themselves. One to revisit, I think.