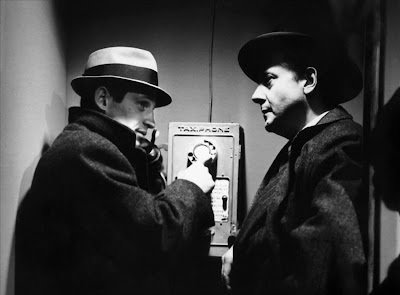 It's hard not to notice the connections between Melville's films when you watch them in quick succession - the constant reworking of themes and individual scenes that's characteristic of virtually all his work comes vividly to the fore. Thus Le Doulos's credit sequence, during which a man walks along a street interrupted by the credits, is repurposed a decade later in Un Flic, where the man is replaced by a slow-moving car, while the setting of a fence's house in a desolate, broken-down neighborhood is seen again in Le Cercle rouge.

Le Doulos, though, is more brutal than either of its successors, with internecine criminal killings in which women, in particular, are callously discarded (of course, they barely appear at all in those later films, so they can hardly be mistreated). There's an especially grim sequence that reveals the true extent of the Jean-Paul Belmondo character's cynicism and self-interest, although the scene, during which Belmondo beats and restrains the girlfriend of a criminal confrère, is also characteristically Melvillian, carefully documenting the character's deeply unpleasant handiwork with something approaching fascination. Rather more enjoyable is the subsequent interrogation scene, filmed in a single 9-minute shot, in which the viewer has the pleasure of enjoying Melville's own skill set, the director and his crew solving dozens of small technical problems as the camera moves throughout a cramped office, rotating from one side to another, the characters entering and departing the frame with precise choreography.

While I wrote about Le Cercle rouge and Un Flic as late-career entries, this is a film of beginnings, albeit not for Melville: the credits are a goldmine, with Volker Schlöndorff still some years away from his debut feature, Bertrand Tavernier employed as a (very young) publicist, and Philippe Nahon in his brief first role. Nahon surely can't have imagined that his career would coast along rather quietly for some 30 years, until his fateful encounter with Gaspar Noé, after which nothing was quiet.

Picture lifted from the blog Pictures and Noise; I'm not sure if the picture is original to the site, but it's from one of my favourite segments of the film.