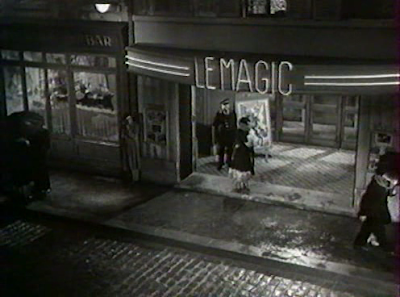 After watching the entirely atypical Miquette et sa mère, made the following year, it was nice to be back on familiar territory, Clouzot-wise. This is perhaps his most lacerating vision of humanity, with a suitably bleak outcome. At least some of the film's grim feel is present in Abbé Prévost's original novel, Manon Lescaut, but Clouzot's decision to update the material, setting it at the end of the Occupation while discarding the more aristocratic milieu of the original, gives the filmed version a grim immediacy that must have been bracing, to say the least, for an audience still dealing with  the Occupation and its aftermath - an audience for whom images of épuration sauvage,  as in the scenes where women have their heads shaved for genuine or imagined acts of collaboration, must have been very real.

There's barely a sympathetic character on the screen - even the one man who has something of a kindly streak is, seen in another light, a human trafficker cashing in on the misfortune of others - which makes it awfully difficult to identify with the protagonists, played by Michel Auclair and a very young Cécile Aubry, as they embark on their odyssey of amour fou. Indeed, the main point in the lovers' favour seems to be the fact that many of the other characters are even more unsavory. That's particularly true of Manon's spectacularly unpleasant brother Leon, a character lifted almost exactly from the novel; he's played by Serge Reggiani, who delivers a brutal, and clearly real, slap to a minor female character that outdoes even Jimmy Cagney's notorious grapefruit-to-the-face sequence from The Public Enemy.

Much of the film takes place in cramped rooms, underlining at various times both the characters' lack of means and their limited horizons, focused as they are only on immediate gain; there is a constant tension to the film, too, though born mostly of a sense that things could go spectacularly awry at any moment. It's not so much a question of whether things will turn out badly as when - and how badly.