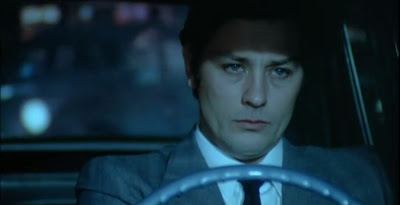 This is an entry in the second Late Films Blogathon, hosted by David Cairns at Shadowplay.

There's late Melville and there's last Melville: Un Flic was the director's thirteenth and final feature, released a year before his death. It's not quite at the level of his previous few films--that sets the bar perhaps unreasonably high--but he returns again to the world of criminality from which he rarely strayed in his later years, re-working obsessively themes and individual scenes. Melville delivered a gift-wrapped 1970 interview, in a book edited by Rui Nogueira, for the future Late Films blogger, suggesting rather morbidly after Le Cercle rouge that he should speak of his career assuming that there would be no more films, that the end could be nigh - or at the very least that this most driven of men might simply lose interest in directing films. He sounded drained and disillusioned after his penultimate film, so it's no great surprise that his final outing is equally wintry - Alain Delon's face looks pinched, cold and bone-tired in almost every scene. 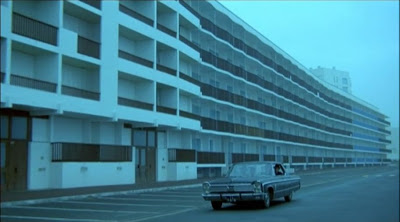 Melville claimed, without elaborating, that he had identified nineteen "variations on my favourite cops-and-robbers situation," all of which were used in John Huston's The Asphalt Jungle. Melville himself had needed five films to cover all of the bases. The heist sequence is obviously one of his favourite among the nineteen, and he allows himself the luxury of a pair here, very different in nature. While we have to wait a good hour to enjoy the superb jewelry heist scene in Le Cercle rouge, Melville opens this film with a bank robbery, silent, methodical, and finally bloodier than intended. The setting is St-Jean-de-Monts on the Atlantic coast, deep in the off-season and utterly bereft of people and energy. Perfectly Melvillian, in other words: why talk if there's no-one to speak to? 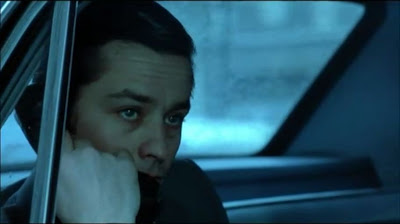 The second heist is a rather different beast: it's more like something out of a spy film, with a helicopter lowering a man onto a night train. Indeed, the spy connection is underlined by the presence onboard of a muscular criminal specialist by the name of Mathieu La Valise (Matthew the Suitcase), whose dyed blond hair looks like that of Robert Shaw's thuggish character in From Russia With Love, with its own celebrated train sequence. Unfortunately, the special effects for the heist are terribly chintzy: I've rarely seen such obvious model work, suggesting that Melville couldn't secure the budget he might have liked. At other moments in the film, though, the obviously fake effects may be deliberate: there's a trompe l'oeil background employed for a outdoor scene at one point that finds a parallel inside the Louvre moments later. 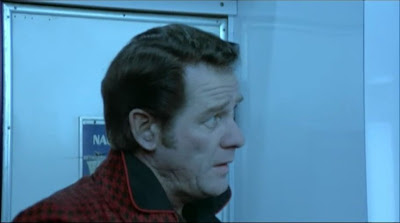 Once we're inside the train, Melville's sure touch returns. There's an extraordinary scene where Richard Crenna, a nightclub owner and daredevil criminal, scrubs his face and divests himself of a boiler suit in order to pass as one of train's paying customers for long enough to complete his theft. The scene goes on for several minutes, during which we see Crenna carefully adjust his coiffure not once but twice, along with numerous other details of his appearance, and yet the meticulous preparations are mesmerizing; as always in Melville there's a tremendous degree of admiration for well-prepared action, just as the director carefully documents, and then explains, Yves Montand's methods of bullet-making in Le Cercle rouge. 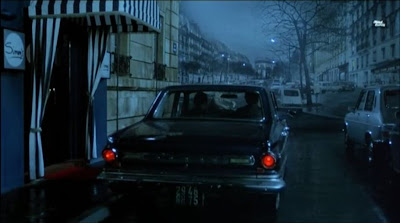 In that same book of interviews, Melville claims that he's no documentarist, and while that may be true of his cops and robbers, who are more distilled essences than rounded characters, the unintended documentary effect of Melville's camera on location is a constant source of fascination to me: the advertisements in a bank with the extraordinary interest levels of the 1970s, a train of the period with a very specific lock on the door that becomes a key challenge within the extended heist sequence, a radio telephone in a car, posters for entertainments in the Paris night. All of it ephemeral, now long gone, and yet memorialized, however inadvertently, for the viewer 40 years on.