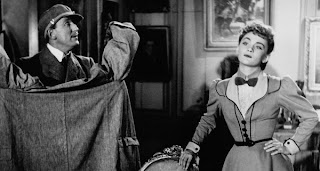 Clouzot's body of work seems so consistently devoted to the excavation of the darker motivations of humanity that it's hard to know quite what to do with Miquette et sa mère, at least in trying to interpret it as a "film by Clouzot." David Cairns suggests that Clouzot took on the directing job, which was the third filming of this material, in something of a panic after the failure of Manon, but that film was actually in the French top ten for the year, with a very respectable 3.4 million tickets sold.

I do agree, though, that Miquette is so odd within Clouzot's overall oeuvre that it seems to demand some form of explanation, whether it's panic, a contractual obligation, or a desire to work with a particular actor (Louis Jouvet, perhaps, after the success of Quai des Orfèvres in 1947). Ironically, Miquette was itself a commercial failure, even though other, similar films did quite well at the French box office around the same time.

While there are some pleasures to be mined from the precise choreography of the camera in several of the set pieces, particularly one in which actors on stage interact, mid-play, with others in the wings, the film's strengths lie less with the director than with the actors. They deliver their dialogue, much of which remains quite amusing in a very silly way, in great bursts, zipping through the lines in true boulevard style. Jouvet, in particular, seems to relish the opportunity to overplay as a self-important man of the theatre; his pomposity, though, is entirely self-aware, as he reveals in one of the film's quieter sequences, a scene that recalls the melancholic retired actors of La Fin du jour. Meanwhile, Bourvil does some early polishing of his good-hearted naif persona even though he's playing a member of the nobility on this occasion, something of a rarity in his filmography.