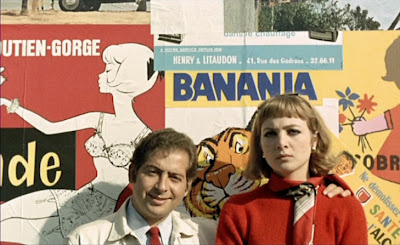 Godard's film famously (infamously?) ends with a title card that proclaims, briefly, "Fin du cinéma." After the preceding 90 minutes, the sentiment seems apt, so far does the film stray from conventional expectations, although it still manages to retain something resembling a beginning, middle and end--even in that order. That said, progress is constantly, deliberately interrupted by title cards, abrupt shifts in time, the intervention of historical and fictional characters, and jarring eruptions of sanguinous violence. There's nothing careless about this: it's not simply a matter of throwing everything at the screen and seeing what sticks, but rather setting out to consistently undermine the viewer's expectations for what a film might deliver, even while Godard simultaneously crafts extraordinarily virtuosic scenes of cinema--the logistically jaw-dropping travelling shot along miles of crowded roadway, mesmerizing in its effect, or the gorgeous shot that pans around a farmyard where a man plays piano, or simply those sequences filled with eye-popping colour (as in the Lichtenstein-esque shot above).