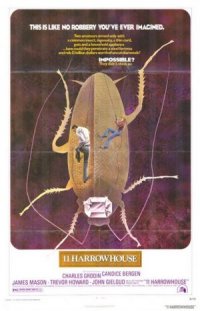 I'm following, yet again, in David Cairns's fine footsteps here. I was a little distracted initially by the intermittent plot similarities with the more recent Flawless - a diamond heist featuring an employee of the diamond company on the verge of retirement, American actors in prominent roles in a British setting - but 11 Harrowhouse ultimately occupies different territory, mostly because of Charles Grodin's voiceover, constantly commenting on and undercutting the onscreen action.

The effect is a little like watching a James Bond movie with a friend who provides a witty ongoing appraisal; it's not hard to imagine Grodin sitting right beside you, subverting the narrative, in which a couple of amateurs rather unexpectedly turn into note-perfect thieves. The point of films like Ocean's Eleven is that the thieves are skilled pros going about their work: those films are a celebration of the virtues of a job well done, whereas here the sheer unlikeliness of the transformation is what lends tension to the outcome, with inexperience threatening to trip the grand plan up. Although it's Grodin's smart underplaying that anchors the film, there are several fine turns from British thesps, too, most obviously James Mason, entirely convincing as a man on the verge of an unhappy retirement, though I also enjoyed John Gielgud's preeningly nasty performance.