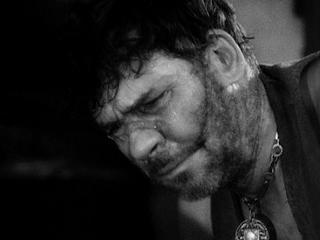 It might be easier to catalogue the ways in which Kongo doesn't offend against the (then still pretty toothless) Production Code. The film features prostitution, drug addiction, alcoholism, incest, torture, sadistic violence, widow-burning, mockery of religion, lascivious leering, and an all-around atmosphere of bone-weary seediness. The film is based on Chester Devonde's play, previously filmed by Tod Browning in 1928, and while I haven't seen the earlier version it's hard to believe that Browning, even with his penchant for the unusual, came up with anything quite so lurid: the atmosphere of moral and physical decay in deepest Africa is utterly unrelenting, making even a Kurtz figure seem relatively benign by comparison.

The film has plenty of rough edges, with several abrupt transitions in tone and characters who appear to be able to conquer their terrible demons of addiction in the cut from one scene to the next, but the overall atmosphere of ruin eats away at the viewer, while Walter Huston incarnates one of the most thoroughgoing screen villains I've encountered. He's a truly misbegotten character for whom even the film's brutal form of redemption seems insufficient in comparison with the outrages he has perpetrated up to the climax.

Even by the standards of 1930s Hollywood, the depiction of African characters is appalling, whether it's the casual use of names like "Fuzzy" or the venal motivations ascribed to virtually all of the African characters (who, of course, barely get any meaningful screen time). While some of the demeaning treatment of Africans is a reflection of the behaviour of Huston's character -- casually shooting a man in the back, for instance -- on other occasions the fault lies with the script (or perhaps the original play), such as the extended sequences which depict widow-burning, which appears to have been borrowed from India since it's at most a very isolated phenomenon in Africa.