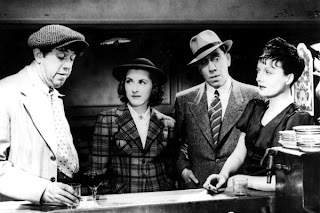 Maurice Lehmann was best known as a theatre director, and all of his four films were adaptations of stage plays, with three of the four involving Claude Autant-Lara as some form of co-director. Fric-Frac had a successful stage run in 1936, with both Michel Simon and Arletty reprising their roles from the original show, supplemented by Fernandel in all his toothy glory, perfectly cast as a naif. All three were established screen stars by 1939, and the interplay between the actors remains strikingly fresh even though the plotting sometimes feels rather forced.

The dialogue makes extensive use of le javanais, a Parisian argot that the film implies was the preserve of the criminal classes, although the characters are constantly translating their words for Fernandel's character, who's a respectable petit bourgeois with a couple of pals from the other side of the tracks. The interpretation, itself the subject of some repetitive jokes, tends to lessen the disorienting effects of the slang since nothing remains mysterious for very long.

While the performances are a delight - though I can only imagine the on-set clash of egos - the cinematic translation of the play isn't entirely successful: Lehmann and/or Autant-Lara elect to use close-ups and cuts at times when a medium shot featuring all of the characters would have better served the material, such as in a sequence when Arletty and Simon give contradictory messages to Fernandel's character before the eponymous break-in; instead of seeing the different expressions simultaneously, the directors cut from one face to the next in sequence, undermining the comedy value.