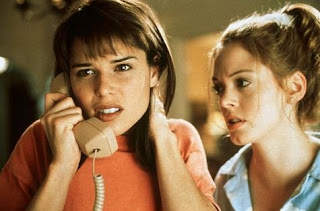 Fifteen years later, after sequels, imitations and parodies, as well as the rise of an entirely new horror genre, it's hard to recall just what it was like to encounter Scream for the first time: like Halloween, it's as if the film is simultaneously unpicking both the teen horror film and its own deconstruction of that genre as it unspools. Although the tone is mostly light-hearted, playing with our knowledge of cinema convention by luring our attention to the corner of the screen or setting up what seem to be obvious boo moments before going in other directions, the filmmakers are still focused on delivering scares, though not necessarily with what's onscreen. After all, they even undercut the visual power of the bloody imagery by mentioning that movie gore is just red corn syrup, and so keep us off balance instead with constant changes in sound volume: I was particularly conscious of this with a young child sleeping elsewhere in the house as the volume suddenly jumped to deliver a thrill; the effect must have been much greater in a packed cinema in 1996.