She Done Him Wrong 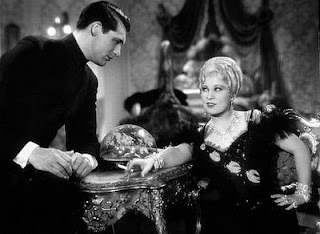 I had only seen a handful of Mae West clips before She Done Him Wrong, all of them showcasing her brassy way with a one-liner and her unique vocal style, so the full-length film came as something of a surprise. Billed as a comedy, and certainly treated as such by the critics, it nonetheless features Mae in a role that flirts with the textbook definition of a sociopath: she's remorseless, self-absorbed, exaggeratedly promiscuous, and with apparently nary a care about the fate of her fellow man or woman. While her va-va-voom charms are amusingly in-your-face, there's a pitiless side to her character that's entirely without humor, and which only deepens as the film progresses, most obviously in a sequence where she tosses off a song after a violent death.

I wondered afterwards if West's reputation has remained so strong because later generations were simply able to see her films while many other strong women characters were suppressed by the strictures of the Production Code; now that so many other Pre-Code films are back in circulation, Mae's persona doesn't seem quite as unique when compared to, say, a Ruth Chatterton or a Barbara Stanwyck, to give but two examples. She's still a fascinating character, though not necessarily in a comic sense.

After enjoying Matt Moore's turn in Rain, it was nice to see his big brother, and bigger silent screen star, Owen show up here as Mae's incarcerated boyfriend, although his part doesn't demand much in the way of subtlety.