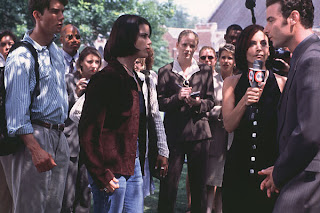 Wes Craven and Kevin Williamson do their best to have their cake and eat it, rushing a sequel into production to capitalize on the success of their first installment while decrying the vapidity of most sequels. While the self-referential tone works well in the early going, particularly in the amusing re-creation of Scream's tightly-wound opening, before long a grim air of repetition sets in, occasionally enlivened by an amusing cameo or a clever set-piece, such as that involving a soundproof glass booth from which a character can only watch helplessly as the killer methodically sets to work.