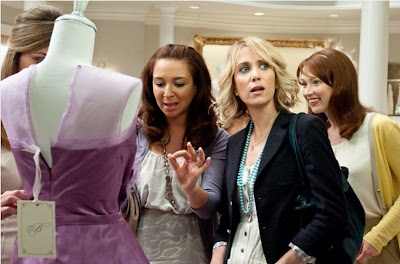 Anyone to whom it came as a surprise that women might both concoct and enjoy a raunchy comedy with bodily functions front and center clearly hasn't spent a whole lot of time in the company of actual human women, though Hollywood apparently falls into the "who'da thunk it?" category. While Bridesmaids hardly re-invents the romantic comedy -- it likes to have its cake and eat it by mocking wedding excess while nonetheless cataloguing in all its expensive glory, in ways that have served Hollywood well for sixty years -- it takes the genre in welcome new directions, exploring its characters' faults and insecurities in ways that occasionally veer into noticeably less comic territory. Indeed, at times I couldn't help feeling that there was some The Break-Up-style bait-and-switch at work -- the wild antics of the trailer replaced by a close-to-the-bone examination of the main character's less than admirable behaviour.

The hand of producer Judd Apatow is never far away: director Paul Feig has Apatow's generous instincts with his performers, granting everyone a scene or two in which to shine, though he also has the same Apatovian tendency to allowing some of those scenes to go on rather longer than necessary. Feig/Apatow introduce the American audience to several overseas TV treasures in the process, whether it's the bizarre sibling duo played by Matt Lucas and Rebel Wilson (despite the actors audibly hailing from opposite ends of the English-speaking world) or the local cop played by Chris O'Dowd, though the script does at least throw in a line to explain the regular eruptions of broad Roscommon accent. Somehow, though, all of the support complements rather than distracts from Kristen Wiig, who makes a fine leading lady more than willing to catalogue her character's flaws without begging for the audience's sympathy (she's sensible enough to realize we're probably all on Melissa McCarthy's side anyway; McCarthy seizes her own role with extraordinary and unapologetic relish, ultimately finding a genuine and deserved truth in her character).