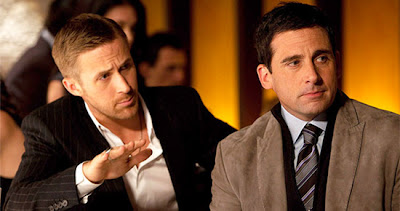 US, 2011, directed by Glen Ficarra and John Requa

With much of its action taking place in and around a single location, and the main characters all implausibly interlinked, Crazy, Stupid, Love comes across like a stage farce at times or, perhaps less charitably, like a sitcom: despite the various outings to malls, restaurants, and schools across Los Angeles we're continually drawn back to the bar in which an unlikely friendship develops between sad sack Steve Carell and ladies man Ryan Gosling, both playing very much to type, though that's not to say their interactions aren't enjoyable.

Still, the film's real spark comes from the presence -- rather sparingly doled out -- of Emma Stone, who has an extraordinary capacity to light up the screen even in her quieter moments (the lovely, extended conversation between her character and Gosling's, for instance, which hints at en entirely different film). As is entirely typical in Hollywood cinema, Carell's character gets to have his cake and eat it, too, tending the flame for his spouse and looking put upon while learning to play the field with Gosling's sage advice; there's not much that even a game performer like Marisa Tomei can do with her role as one of his conquests, although she gives it the old woman-scorned try. Still, the big reveal is pretty fun, even if the latter sections try rather too hard to milk the tear ducts.