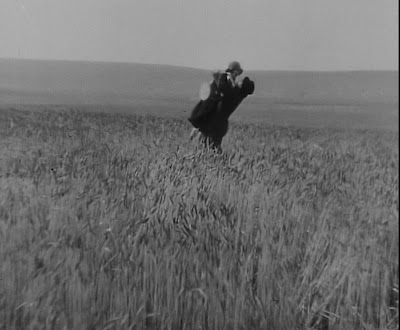 On the narrative level, Murnau's film is pared down to almost mythic levels -- boy meets girl, boy marries girl, boy struggles to win father's acceptance of marriage. That's hardly the point, though -- Terrence Malick's Days of Heaven, directed inspired by City Girl, similarly transcends the simplest of narratives to strive for emotional resonance, again among the hypnotic wheat fields of the heartland. The early sections of the film take place in the big city, where a young man has been sent to sell his family's crop. Murnau's unpicking of the city experience is as acute as Chaplin in Modern Times -- he re-casts a city restaurant as a a virtula factory, each widget, or diner, quickly slotting in to replace the last, every minute frantically assigned a purpose by the streams of workers. It's an overwhelming experience for a man used to rhythms dictated by the seasons and the elements rather than by the daily clock, and the joyful return to the land as the film advances is surely not just the joy of a young man in love but equally an embrace of another way of living. His run through the wheat fields, new wife in tow, is the high point of the film, an apotheosis of filmmaking romance as the camera is in exhilarating motion with the pair.