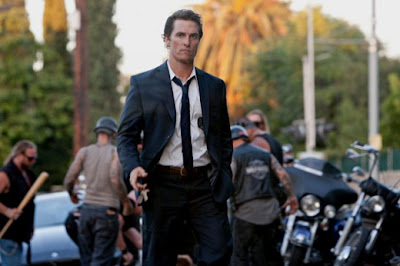 I enjoyed Michael Connelly's source novel, even if it's not quite Connelly at the peak of his form, and Brad Furman's adaptation is pretty faithful, perhaps even too faithful given the plot-cramming required by the running time. That does a particular disservice to the crucial backstory that becomes central to the evolving plot, and which has considerably more space evolve on the page. Matthew McConaughey is well cast in the central role -- there's a certain charm-offensive continuity with his early lead role in A Time to Kill, though his lawyer character here is light on the liberal guilt and heavy on the self-interest -- but it's the support that really shines, even if many of the players have barely a scene or two in which to shine. I'm not quite sure what Furman was offering to convince fine actors like Marisa Tomei and Michael Peña to accept minor parts, but they make the most of their limited screen time; I'd rather have Tomei as a luminous supporting player than not at all.